"a method of transmitting text information as a series of on-off tones, lights, or clicks that can be directly understood by a skilled listener or observer without special equipment".

Here's the alphabet and the numbers.

Simple, isn't it? But how would one learn the code? In Mind Performance Hacks, Hale-Evans mentions Frank Gilbreth, an early scientific management advocate and efficiency expert. Gilbreth was blessed with twelve children. Two of them wrote Cheaper by the Dozen (my review) and Belles on Their Toes about the household. These books cover their family life including many efficiency tricks Gilbreth learned his kids. He taught them for example to wash themselves efficiently in the meanwhile studying foreign languages by listening to recordings.

During summer, Gilbreth taught his childeren Morse. In their holiday home, he wrote the alphabet on the walls (...). Then he added keywords, whose accents were a reminder of the code for the various letters like DAN-ger-ous, dash-dot-dot, DAN-ger-ous. Unfortunately only four of Gilbreth's study aids are left (for A till D). Therefore I'll use another set of mnemonics in this post. I like these as they are linked to the NATO phonetic alphabet. 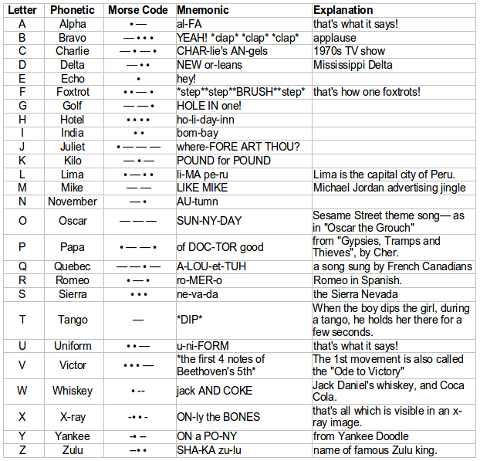 For visual minded people - and who is'nt? - there's also another reminder.

Have you ever used Morse? How dit you learn it?